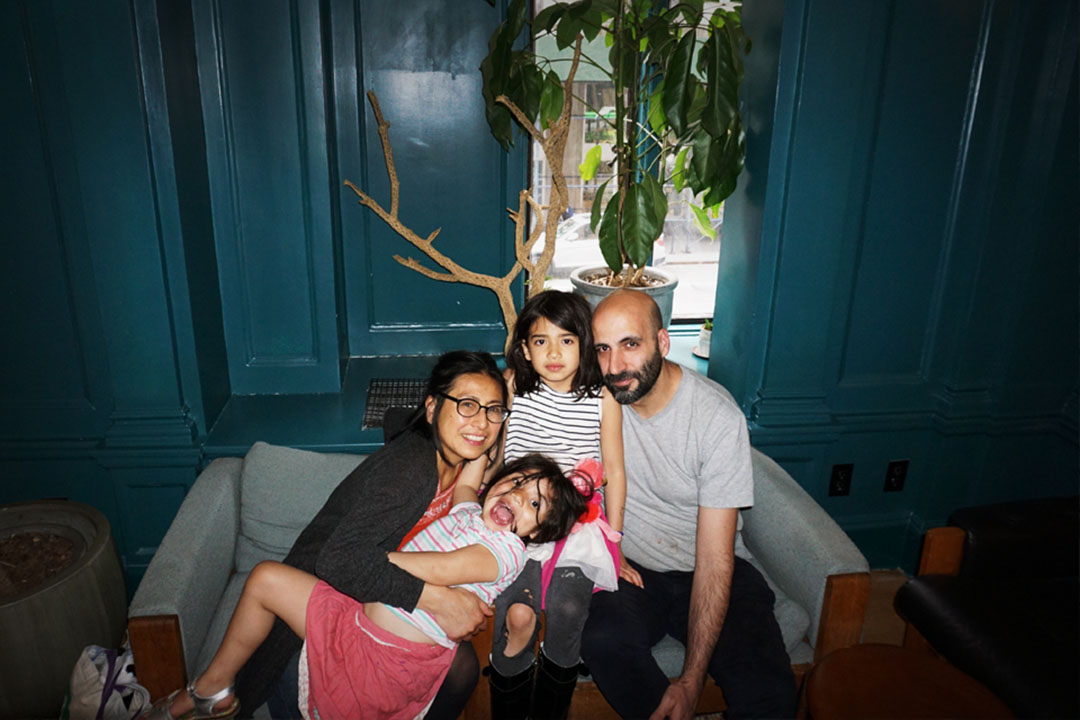 As part of our ongoing monthly dinner series, The Neighborhood, we were excited to welcome the team from Mokonuts in Paris — the famously elusive restaurant (it closes at 5pm) run by pastry whiz Moko Hirayama. The bakery was referred by The New York Times as a “sophisticated, personal synthesis of French, Middle Eastern, American and Japanese flavors.” Just before the dinner, we sat down with Moko to talk about the restaurant’s unique set-up, and how she’s managed to build such a sought-after spot in one of the world’s most famous restaurant cities.

Freehand: Mokonuts is known for closing at 5pm.

FHNY: All-day cafes are big in New York at the moment. Do you have a philosophy on how people should eat during the day versus at night?

MH: At night, we organize private dinners for a minimum of 8 people and in terms of what we serve between at night and at lunch — there’s not much of a difference.

FHNY: What about daytime wines?

MH: It’s interesting, more and more people come here to enjoy themselves. There’s a certain number of “I need to eat here quick and go back to work.” Those people drink soft drinks or drink water and leave. But more and more people are spending time here and having a glass, if not two or three, sometimes a bottle between two people. We have an extensive wine program.

FHNY: How is your wine program suited toward drinking during the day?

MH: The food we serve in general is very light. After you finish your meal you don’t feel like you ate too much and can’t move. The wines that fit those kinds of foods are lighter. We only have natural organic wine and it tends to be more on the dry side. Not really heavy wines. We do have a heavy red for those who wish to drink them, but that’s not what we sell most of during the day, except in the wintertime when we have meat dishes and people really want to have something that can hold up to that. But in general, everything is on the lighter side.

FHNY: Do people ever order wine at breakfast?

MH: Breakfast? No. But sometimes they come in the afternoon and they just want to have a glass of wine and eat cookies.

FHNY: What are your non-alcoholic drinks beyond coffee and tea?

MH: We always have 3 or 4 soft drinks, and everything is house made. We always have lemonade with thyme and orange blossom — that’s been a staple since we opened. We always have hibiscus iced tea — something I’ve been so obsessed with. We also make concentrated fruit spirits, spiked with herbs or spices, and we cut it with sparkling water to make sodas like bitter orange soda or strawberry and pepper. Those change according to season. I didn’t want to do juice or smoothies — it’s not what we wanted to do here. It’s not your typical coffee shop.

FHNY: What are the best seasonal ingredients in Paris right now in the spring?

MH: Strawberries just started last week. We have rhubarb and strawberries just starting, finally, after a long season of citrus. The citrus this year was quite interesting — we had limequats, kumquats, mandarins, satsumas, pomelos. In terms of the vegetables, we have peas and fava beans. Asparagus right now is in season. It’s nice to get out of root vegetables.

FHNY: What kind of flour do you use?

MH: For flour, I work with this organic mill nearby. We use a darker grind. The category’s a bit different from the US. Here it’s numbered, with 45 being a really white flour. The only thing I like to use is 65 and 110. That’s for all the cookies, all the baking, everything.

FHNY: Is there anything you always buy instead of making?

MH: We make yogurt for breakfast, and one of the appetizers we always have on our menu is labneh, a yogurt dip. We started making yogurt for labneh so we could be 100% homemade. But the quantity of yogurt we needed to produce to keep up with it was not worth it, so for that we buy yogurt. Eventually we want to do our own charcuterie, but not yet.

FHNY: Is there anything you want to do in New York or bring back home?

MH: I want the kids to go up the Empire State Building. I studied Urban Studies before I went to law school. I love the city and I love skyscrapers. That was my passion for years when I was in New York.