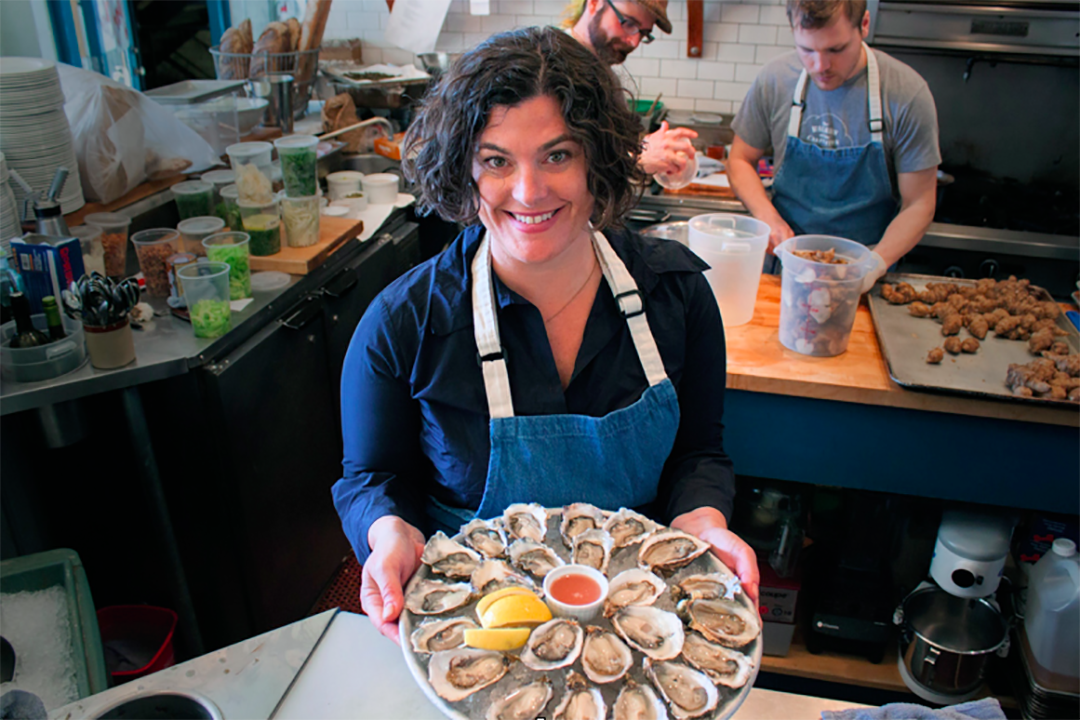 On March 14, our partners, Happy Cooking Hospitality, welcomed Renee Erickson, the individual behind The Walrus and the Carpenter, one of Seattle’s most beloved oyster bars, as part of our monthly dining series: The Neighborhood. She served up some of her favorite varietals of Northwest oysters in raw, stuffed, and fried forms, along with a few other dishes that took advantage of the bounty of Northwest produce, like biryani made with Washington squash and hazelnuts. Fresh off of the dinner, Renee sat down with us to muse on her favorite subject (oysters, of course), and where she found inspiration for her restaurant.
Interview by Tammie Teclemariam for Freehand NY

RE: Particularly to The Walrus and The Carpenter, it’s trying to showcase our amazing oysters in an environment that was less formal and more lively. A lot of times I think oysters are a side show to many things, including at steakhouses. Travelling to Paris and seeing the place they have in daily life is something I really admired so I was trying to create a neighborhood location that focused on the simplicity and freshness of the oyster.

TT: What is the story behind the name of the Restaurant?

RE: The story of Through the Looking-Glass (by Lewis Carroll) is about a Walrus and a Carpenter who walk down the beach telling stories about the sea and start talking directly to the oysters because they’re hungry. They basically lure them along the beach and then eat them all; it’s funny, charming, and of course a little bit sad for the oysters.

RE: Generally speaking, I love an oyster from the Pacific Northwest. I prefer oysters from the Hood Canal versus the South Sound because they tend to be a little brighter and more vegetal focused. My historically favorite oyster from that area is called a Hama Hama, a beach-grown Pacific oyster than has not been tumbled, so it’s an oyster that’s closest to its true form: all frilly and beautiful shell, and kind of a more warm liquid and meat texture.
The difference to that would be a tumbled oyster which becomes a more compact, more firm oyster. I prefer the light, more fleshy, gentle textured oyster.

RE:It’s a technique to grow them.

TT: Do you mostly work with farmed oysters? Are oysters generally sustainable?
RE: There are very few naturally grown oysters anymore. People farm them for the amount of consumption that we have. New York City decimated the oyster population, I think that’s happened all over the world. It’s a species that farms well. You don’t have to feed it, you basically have to nurture it along and give it some space to grow. I know lots of [oyster] farmers.

TT: What’s your favorite thing to drink with oysters?

RE: A crisp white wine. Nothing that’s been oak aged, just really bright and minerally.

TT: I want to ask about the bread at your restaurant because every review mentions how good it is.

RE: We serve —almost entirely— bread from two bakers. One is called Ben’s Bread, he’s actually an employee of ours and makes bread for a couple of our projects. Then Sea Wolf is another bakery in Seattle and they also make our rye bread, which is what we generally serve with oysters, along with the levain, the rustic French loaf.
In the Northwest we have a lot of wheat producers, so it’s all locally harvested wheat. It’s very flavor-forward — it has a lot of intense rye and wheat flours.

TT: What other PNW ingredients do you love?

RE: Seafood. Probably my favorite would be a spot prawn, a prawn that’s harvested from the Salish Sea, it’s kind of like a langoustine. A lot of times it has a roe sack underneath its legs so you get to eat that as well. Also dungeness crab, I’m a big fan of. We have a local halibut that’s harvested in the spring called Salish Sea halibut. It’s a smaller halibut that’s really beautiful and almost a pale watery pink translucent color.

TT: What were you serving at the pop-up?

TT: Do you find pearls all the time?

RE: They do exist, we don’t find them all the time. The ones that we wear tend to come from Tahiti and places where they actually put sand in the oysters to form the pearl. The ones that are naturally formed are not quite as beautiful, but it’s still really fun.

TT: What do you like to do when you’re in New York?
RE: Visiting other friends of course, lots of chef friends. Running around and looking at art and eating delicious food. Right now I’m at the Met Breuer having lunch at Flora Bar.