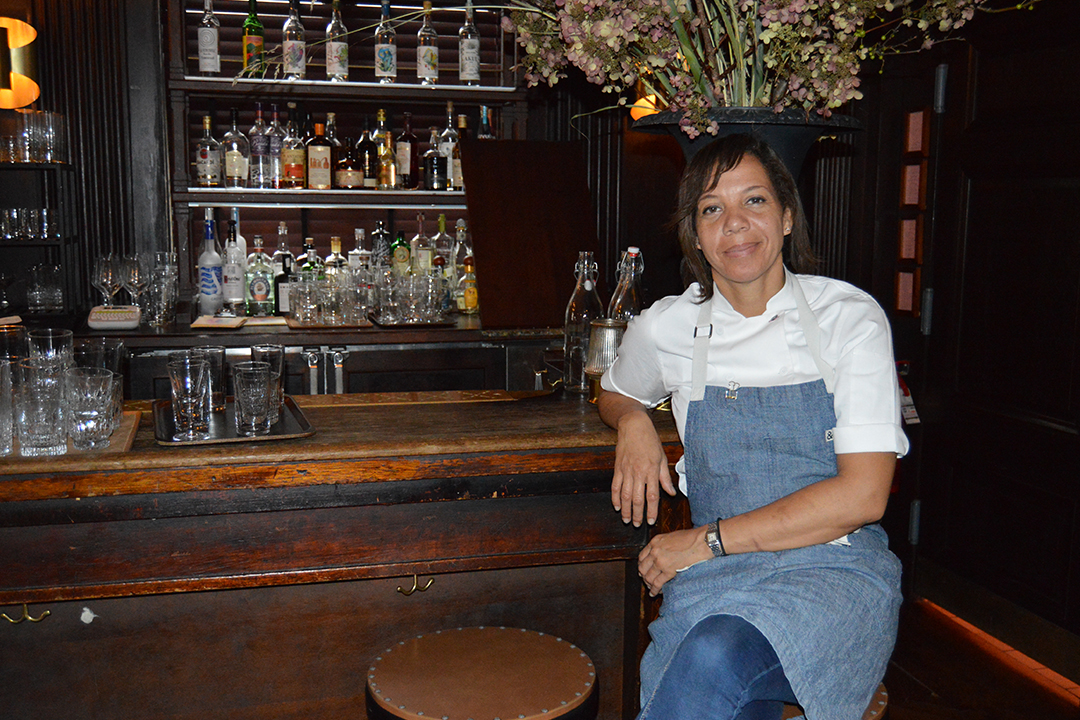 7 Aug - Nina Compton of Bywater American Bistro gets our goat

As part of The Neighborhood: Dinner Series, we were beyond excited to bring one of the most exciting chefs in the country right now, Nina Compton of Bywater American bistro in New Orleans. We are constantly blown away by Compton’s seamless fusion of Caribbean flavors with NOLA spunk. Read on to hear her talk about curry goat, rum, and the other tastes that she craves.

Freehand: Curried goat with gnocchi is one of your signature dishes, can you tell me a little bit about it?

Nina Compton: That dish evolved in a funny way. Being from the Caribbean, curry has always been my comfort food, but I didn’t really want to do curried goat with white rice because you can find that in any Caribbean restaurant, so I was thinking of how to make it stand out. Goat is not something people really go for, but I do, so I wanted to make it a little more approachable and add sweet potato gnocchi. I thought that would be a fun way to do it.

FH: The texture of gnocchi reminds me of certain African starches.

NC: Right, yeah. It’s like having a warm blanket pulled over you when you eat this dish. It’s very comforting, and there’s a lot of flavor and texture going on.

FH: Goat is not a thing most Americans eat every day, or something they choose in a restaurant.

NC: It’s funny, when we first opened I told my husband, “I’m gonna put curried goat on the menu. It may not sell, but I’m gonna try it.” We were getting one goat a week, 50 pounds, which increased to six goats, so we get 300 pounds a week. I told the first farmer I’m probably going to need one or two goats a week, and then it became five goats. He came to me one day during the busy season, when we go up to seven goats, and said, “I’m running out of goat, I can’t keep up!”

FH: And you’re only ever going to buy whole goat?

NC: Yes, of course. I think the difficulty is finding goat, because a lot of supermarkets don’t have it, but if you go to Middle Eastern or Asian markets, they have goat.

FH: Is goat one of the more popular meats in St. Lucia, where you’re from?

NC: Outside the U.S., goat is the most consumed meat, a lot of people don’t know that. Goat is highly prized in the Caribbean.

FH: Another thing that’s popular in the Caribbean is rum.

NC: Rum is definitely the drink of choice back home. Over the years we have learned how to age it very nicely. There are certain types of rum you want to drink your rum and coke with, and there are certain types you just want to sip and enjoy. That’s the beauty of rum. I wish more people would appreciate it because it’s great to have as a digestif at the end of a meal. I compare it to having a great scotch. The sweetness is so beautiful.

FH: Fruit shows up all over your menu. What is your approach to using it in savory dishes?

NC: A lot of people don’t use things like passion fruit or mango or papaya in their cooking, so I try to showcase that so people can understand my upbringing and my appreciation for tropical fruit. I was spoiled growing up in the Caribbean where, in our backyard, we had ten different types of mangoes, avocados, and limes that were bigger than your hand. The availability of fresh fruit is something that I grew up with. It just reminds me of spending weekends with my parents or going to the beach and dipping an orange or a mango in that salty ocean water and just taking a bite. That’s my childhood.